Which Hurts More Airsoft Or Paintball?

When you get confused to decide airsoft or paintball, the prior question often asked is how much each of them hurts. Some who want to play either of these sports are eager to know which pain is worse.

Let’s read the following article of Paintball Advisors to go in depth on the pain of airsoft and paintball. 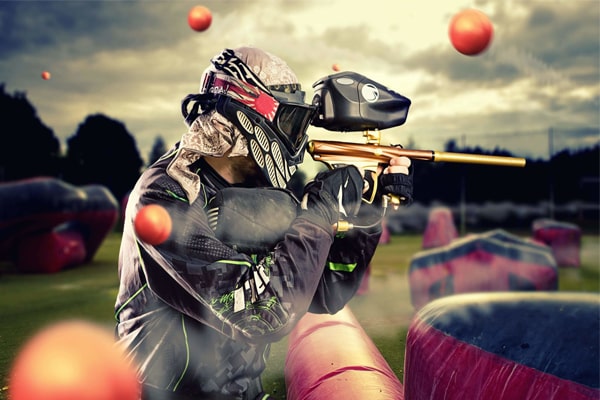 Compared to paintball, airsoft is considered slower-moving. It is more associated with endurance and plans among numerous players, as they immerse themselves into the game.

By contrast, paintball is generally more of a sport. Paintball players go fast-paced and move dynamically. It typically involves more tactics and abilities of a singular person.

Airsoft is different from paintball at some points, though. Since airsoft looks like a game, it has been intentionally created in the form of real soldiering, with traditional military arms followed by tactics and various missions.

As mentioned above, paintball looks like more of a sport. It does not try to look realistic. Its main purpose is playing. The rules are more competitive. The equipment is guns’ fire paintballs, and does not model military weapons.

Which Hurts More Airsoft or Paintball? 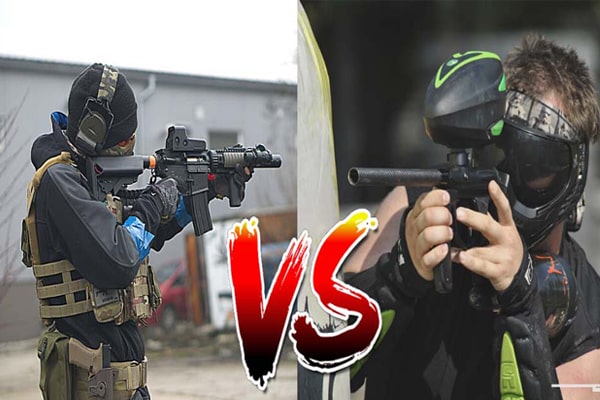 Airsoft vs. Paintball: Which one hurts more? Evaluating how painful something hurts is almost an impractical task, given that each player feels the pain differently. Yet, by paying attention to the facts, it is possible to conclude which one hurts worse, either airsoft or paintball.

Generally speaking, many people agree that paintball is the more hurtful of the two games. Let’s look at the reason why it is.

Although both of them are similar at various points, projectiles that each sport shoots are completely different. While paintball adopts a projectile whose  diameter is roughly half of an inch, airsoft bb projectile is just 6 millimeters.

In addition, paintball projectiles contain a gelatin substance wrapped by a wax-like outer shell. The airsoft bb is totally made of plastic material.

Then, as two sports are different in size and material, paintball affects a significantly wider surface area compared to the airsoft bb, resulting in imposing greater pain. Moreover, since the mass of a paintball is heavier than an airsoft bb, the pain is much worse.

While paintball and airsoft use the same model of gun, and the same kind of gas or compressed air to shoot, the internal structure in every sport are completely different.

Whereas a player can dial up the paintball gun to fire about 500 feet per second (fps), an airsoft gun generally shoots significantly slower, roughly 350 fps. You can refer to the most popular paintball guns parameters here.

In popular imagination, 150 feet per second would not produce a considerable difference. However, the distance that projectiles of each sport can go at a certain speed would be a matter.

As a paintball has a greater mass, it can keep power better and move at a longer distance. Besides, airsoft bbs are likely to shoot at a shorter range. Then, while both are exposed from the barrel at one speed, it’s not long before the similarity disappears.

Some people may wonder how speed is related to the level of pain of each sport. How to say, without accounting for the logic, sophisticated computations,, let’s take into the basic principle.

Speed will be a matter when it’s connected with the heaviness of an object. A paintball (the weight is about 3 grams) would hit tougher than an airsoft bb (the weight is from 0.12 to 0.25 grams. It may depend on the quality, but the speed is still the same.

Many players claim that, as airsoft bbs are smaller than paintballs, the effects hurt less. When you look at the injuries after being shot by paintball and airsoft guns, the bruises are significantly contrastive.

The pain from the paintball gun, on exposed skin, generally includes serious bruises and welts which may need a couple of days or weeks to heal.

By contrast, the effect from airsoft BB guns normally triggers rather small welts which are nearly invisible in the following day. Then, evaluating by the injury shapes, it is possible to deduct that paintball is the more hurtful of the two sports. 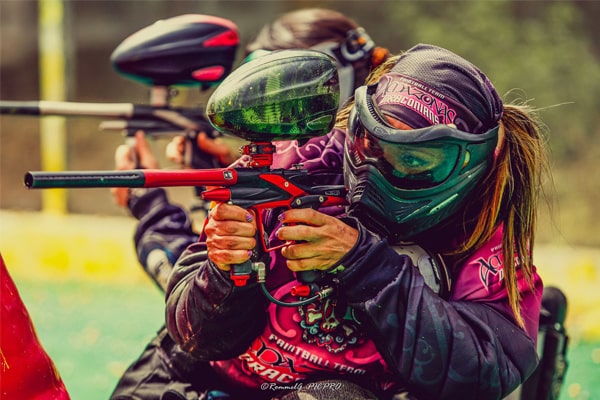 When it comes to proximity, the balance starts to lean toward airsoft bb when it becomes the more hurtful of the two.

In the middle of plays, almost all paintball arenas have a minimum shot distance that bans players from shooting the rival when they are considerably close. It is generally within 10 feet of each player.

By contrast, airsoft normally only demands that players do not put the end of the barrel against the rival. Therefore, this freedom lets players get much closer to the rival and fire them with airsoft guns.

The proximity can trigger a large amount of injury, particularly if the rival is carrying a thin outfit. When very short-distance shots are prohibited in paintball, airsoft bb is the most hurtful. 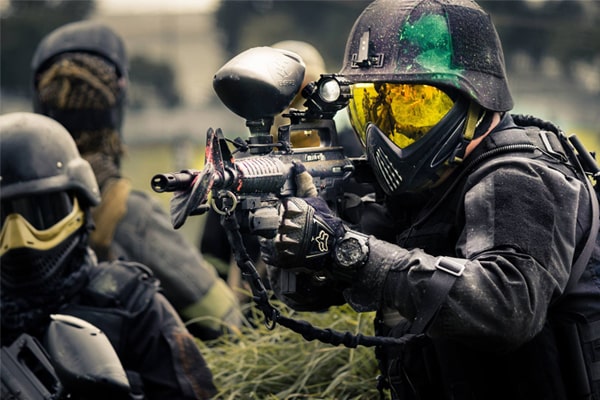 In paintball, owing to the seriousness of injuries from the shot, it’s normal for people to carry thicker outfits or even padded outfits particularly created for paintball.

In airsoft, on the other hand, no such concern is noticed. In fact, almost all airsoft players wear pretend military soldiers rather than wearing for pain protection.

In addition, all paintball matches demand players to carry a large mask (which can cover all the face) to preserve the face, and eyes, from the effects.

In airsoft, it is popular to wear no such equipment for face tolerance. Rather than that, most players would carry effect-resistant glasses but put the face free. Still, faces can be one of the most hurtful parts of the whole body to be exposed.

Now, whether airsoft is more painful than paintball results from players’ capability to endure pain and decrease the rate of being shot.

Still, the injury of both sports is hardly a component in the reason for players to quit the game. As a result, avoid the shot as much as you can and there are many other fun things waiting for you in the match.