How To Aim A Paintball Gun Accurately? [Effective Guidelines]

Paintball is among the most popular combat sports on the earth. Many players primarily defined this game as firing at others to score hits, it relies on strategy. So, how to aim a paintball gun correctly?

Like other guns, you will need some practice to target and create a great shot. In addition, you may need some high-quality equipment and the best paintball gun from Paintball Advisors to deal with the game efficiently.

This article provides the effective guidelines that you may need to aim accurately in paintball. Let’s check it out!

How To Aim A Paintball Gun Correctly

The accuracy with which you target and fire a paintball gun depends on the body posture. Your upper torso should be steady enough to be unaffected by the motions of your lower one.

Maintain a stable head posture and use both eyes to aim, focusing on the middle of the marker.

You can rely on the instructions in the video below to better understand how to aim a paintball gun with accuracy. 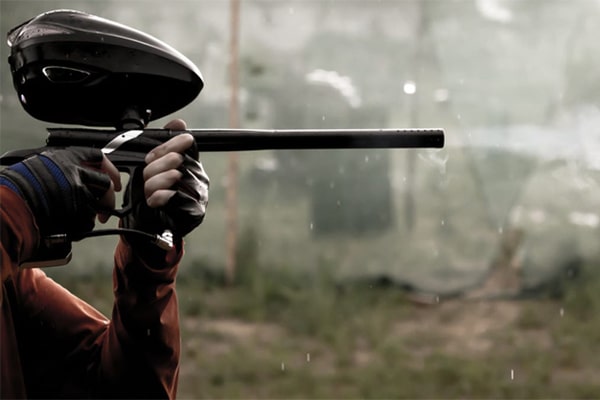 The most effective method to develop any talent is to exercise it as much as possible. For example, to rehearse the Paintball match, go into a firing range or any safe location. Begin with a solid object at a reasonable distance.

Once you have mastered it, you may experiment with other varying distances. You may try shifting targets during a time and may not see a difference in your skill right away. However, you will improve if practicing regularly.

2. Test Your Paintball Marker Before Taking The Game

Remember to inspect your paintball marker before beginning the game. Notice that you have already cleaned your marker since dirt might affect the paintball’s speed and direction. You may also see how it works.

Find a quiet location where you can fire. After that, choose a target, shoot, and monitor it. Change your aim if it does not go entirely straight and strive again to get an excellent shot.

Continue to experiment until you find out the way to alter your aim such that each next shot is more precise than the last.

3. Align The Marker With The View 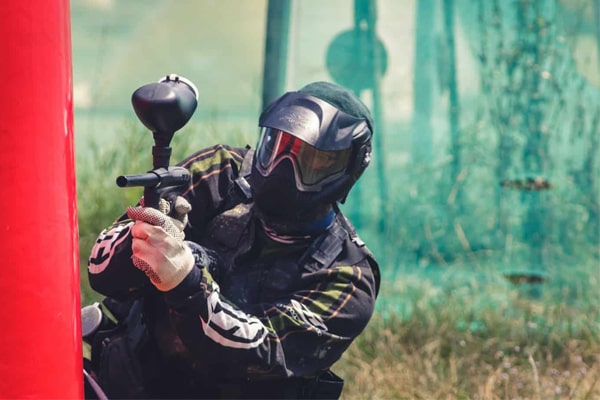 Another effective method is to align your paintball marker with your sight. It is harder to judge angles accurately if you do not align the rifle with your posture. You can assure that the paintball goes wherever you want it to go by aligning it.

However, if the marker pulls back significantly, it may return directly to your face, so be cautious even if you are wearing a protective mask. Adjust your marker outward if it blocks your vision. It’s best if you can maintain it as balanced as possible.

4. Relax And Patience Is Key

Several Paintball players are so enthralled that they neglect to spend the effort to aim correctly. Your initial inclination is to keep attacking toward an enemy who jumps out.

Whether they see you straight away, your gunfire’s sound will warn them of your location. They’ll then shoot back at you. You’ll lose the game if they’re an excellent shot. Aiming will just take only a few seconds.

Remember to be patient and stay focused. It may be tough to reach your aim with lots of notions. On the other hand, it could amaze you about your progress with a little more focus. 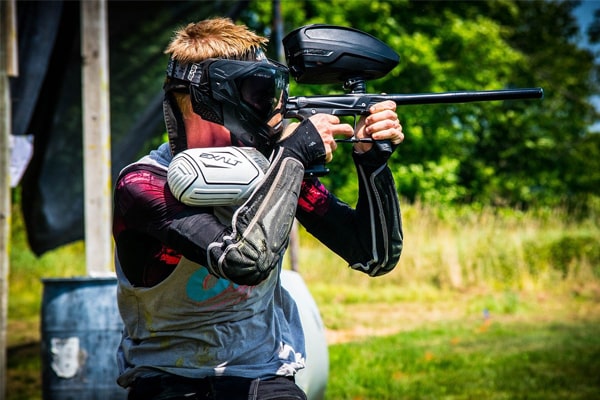 5. Notice Your Position Is Closer To The Target

Coaches give players the stances and motions to win with precise methods in every sport. For example, in paintball games, your location affects your shot. It’s tough to position your weapon and shoot straight with an uncomfortable posture.

With your torso oriented toward your goal, which is the optimum posture. Your gun should be in line with the body.

Paintball competitors will always be on the move during the match. Therefore, your target will not always be motionless. Determine the speed of your target and keep your handgun aimed in their direction.

Predict your opponent’s position on the field when triggering the gun. Then calculate the time paintball will reach your aim. Finally, combine your shoot and calculation when the time is perfect.

It may take a lot of effort to reach a moving target. However, you will become a valuable player if you gain this talent.

How To Choose The Right Maker?

With so many markers to select from, it’s important to pick one that fits your status. 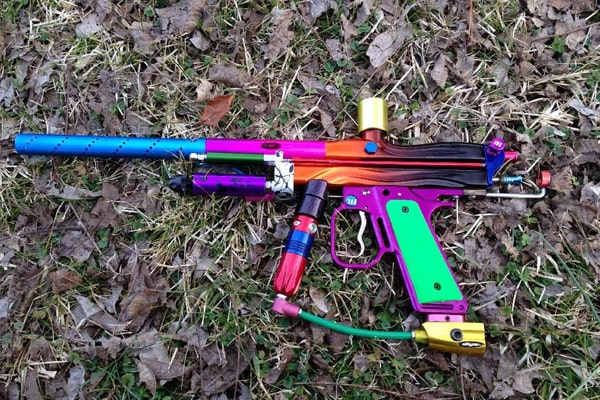 Machine gun paintball marker: One of the most sophisticated and high-end markers available. It is not a shotgun in the traditional sense. However, it allows you to fire paintball guns at a rapid rate.

Electronic gun: Is extremely expensive to purchase. To explain its exorbitant price, it has many shooting modes.

For newbies, getting used to this pistol can be difficult, but with a few rehearsals, you should be able to pick it up quickly.

Full automated marker: This boy is extremely sophisticated, which stands out since it can fire multiple paintballs with a single pull of the trigger.

Despite its popularity, you may rarely see it in competitions, therefore you’re more likely to see it at a regular paintball battlefield.

Ramping gun: We have not recommended this item for newbies because of its sophisticated operation. For those who get used to it, it shoots paintballs depending on how quickly they pull the trigger.

If you trigger it twice per second, for the following pull, it will shoot two bullets.

Pick the marker that matches your ability level after understanding some sort of paint marker.

It is also a good idea to go with standard-sized guns since some of the unusually long or short ones might be difficult to manage, especially if you’ve never used one before.