Airsoft is an exciting competitive sport because of its diversified gameplays. In this game, besides airsoft guns, airsoft grenades are also useful items. But to use this tool effectively, you need to know it well. How do airsoft grenades work?

Most airsoft grenades contain an amount of gas or explosive locked inside by a pin. You will activate the grenade by pulling out the pin, then throw it to the target. The grenade will detonate and release what it contains. 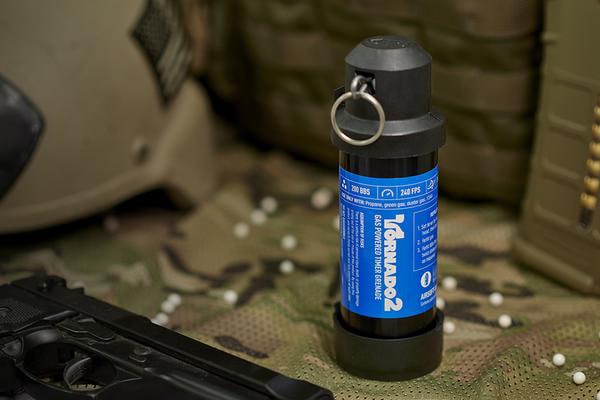 How Do Airsoft Grenades Work?

Airsoft grenades come in a lot of different types and each works differently. But in general, an airsoft grenade has a pin to keep the gas or explosive and other projectiles inside.

By removing the pin, players will ignite the fuse of the grenade. When the fuse burns to the inside materials, the grenade will detonate.

Airsoft grenades can make a high firing volume and a “shock and awe” when you use them. Here are some common types of airsoft grenades and how they work on the field.

Most airsoft grenades ignite their fuse by the “ring-pull” technique. But pyrotechnic grenades use a match-like substance.

Inside each pyrotechnic grenade, there is a small amount of explosive. When you burn the fuse and strike these grenades, they will explode and release the substances inside.

If you burn a smoke grenade, it will create a thick smoke that lasts about 2 min. The composition of this smoke includes potassium chlorate, lactose, and a coloring dye. Players use this airsoft grenade to hide when moving in an open space.

For the drag grenades, they contain some fireworks which make a bang when burning. They also simulate real grenades with fragmentation made by powder or dried peas. Drag grenades are useful to eliminate opponents in difficult spots. They can also take out many opponents at once.

Therefore, pyrotechnic grenades are only for players of age 18 or older. Besides, using these grenades in dry areas with flammable materials may cause a fire.

The manufacturer uses blanks in making these grenades to create effects like gunfire. So, these grenades can make a very loud sound when they explode.

The sizes of blanks used in these grenades vary from 9mm to 12mm. Blank-firing grenades use compressed gas like CO2 or airsoft gas. They have a pin to lock the gas inside and work according to the “impact” or “delay” mechanism.

When the player wants to use a blank firing grenade, he will pull out the pin. Then he throws the grenade at the target. It will explode when hitting the hard ground.

The gas compressed under high pressure will create a loud bang and pressure waves. With the blanks, the sound created by these grenades is like a gun-shot sound.

If these grenades don’t hit any hard surfaces, they will also explode after a pre-fixed time. Thus, after removing the pin, don’t hold a blank firing grenade for more than 2 seconds.

Because of their loud sound, blank firing grenades can cause ear damage. So, some airsoft sites may ban these grenades or restrict using them.

Unlike pyrotechnic grenades, blank firing grenades don’t create light or spark. Thus, they will be safer to use in dry areas. Blank-firing grenades are expensive, but you can reuse them. 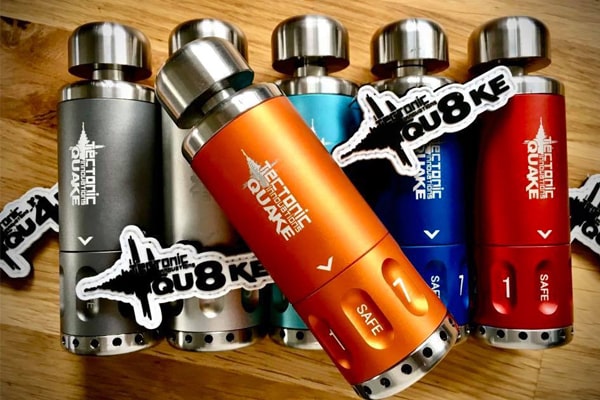 These gas grenades also contain gas compressed under high pressure locking with a pin. Players will activate them by removing the pin. Then, the activated grenade will detonate upon impact with hard grounds or after some seconds. These grenades are ideal to remove a large group of enemies.

Projectile gas grenades also use compressed gas like their audible counterparts. But they will release airsoft BBs along with the gas when exploring.

Because of the large amount of BBs, projectile gas grenades don’t cause much harm. To attain the greatest velocity and range, you should fill these grenades with 0.2g BBs.

Projectile gas grenades use green gas or CO2, so they have lower prices. But they may not work well under cold weather. 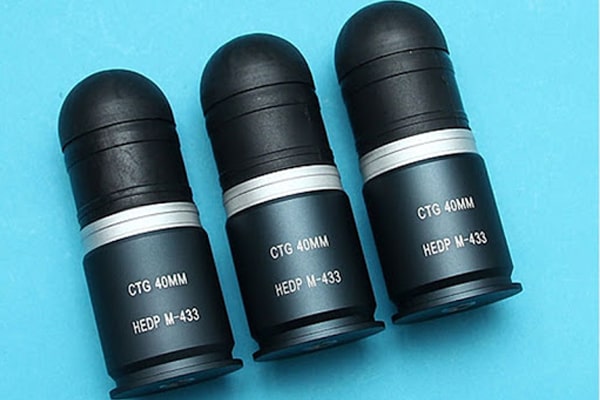 Some Tips When Using Airsoft Grenades

Here are some tips to use airsoft grenades effectively on the airsoft site.

Have your grenades prepared beforehand

You should prepare your grenades before the battle, especially the reusable grenades. Remember to fill gas, BBs and make everything ready beforehand. Besides, you need to keep grenades in an easy-to-reach place.

In the airsoft battle, you will have to hold your gun in one hand. So the grenade must be handy to grab with your other hand. 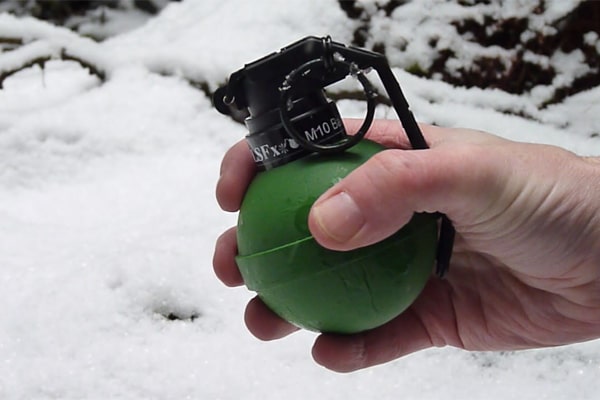 Use grenades when possible

Many players often save grenades for use in the perfect moment or the last solution. But in this way, you can be out of the game before using any grenade. So, when you think it’s possible to use grenades, go for it.

Always bring more than one grenade

You should bring at least 2 grenades in a game and use them whenever you have the chance.  It’s better to use reusable grenades such as gas grenades or blank firing grenades. You can recharge them later so feel free to throw them.

You can feel stressed when you have to make an important throw with your only grenade. All of your team are watching you. In this case, you should take it easy.

Think simply that you need to throw the grenade as usual without minding its importance. You will have a better throw than throwing with a high tense. You can also give the grenade to your teammates if you feel unconfident.

Pay attention to your surroundings

Before you throw a grenade,  take some time to observe the surroundings. You should also leave a route to escape if the throw goes wrong. Besides, you need to calculate the impact scale of the grenade to avoid eliminating yourself. If you think it’s not a good target place, don’t use your grenade.

Know the position of your teammates

Always keep in communication with your team and announce them if you intend to use grenades. Don’t throw any grenades if you are not sure about your teammates’ position.

Hopefully, you are clear about the working mechanism of airsoft grenades. Different types of grenades may work in different ways, but their impact scale is large. You can consult the tips above to use your airsoft grenade most effectively. Thank you for following this post!